We are monitoring the latest advice from the Australian and Victorian Governments and will bring you further details regarding the recommencement of Coal Creek Community Events.

Observer: $5 (for parent with child under 14 – watching activities only, no entry to presenters)

Buy your tickets from Eventbrite here!!

Owen Hill is the founder of Microbee.

His presentation to GEEKFEST19 will outline the evolution of the computer from the early hobby days, software development, to marketing and manufacturing in Australia concluding with some fascinating success stories when Microbee was used in real life applications such as education, engineering, entertainment, transport even medicine.

Microbee Computer was designed and manufactured in Australia and launched in 1982. The first 1,000 Microbee computers were sold in kit form to electronics enthusiasts for them to assemble as their home computer. Fully assembled and tested Microbees soon started to roll out of the factory in Gosford NSW.

Microbee became one of the most popular home computers designed and manufactured in Australia and New Zealand.

In 1983 the NSW Department of Education issued a contract for  the Microbee computer (along with Apple II) for use in schools. Other Australian states then approved Microbee for use in their schools soon after. Exports to Sweden grew rapidly when Microbee was also selected for schools in Sweden, Denmark and Norway.

In 1985 Microbee Computers was listed on the Australian Stock Exchange (ASX).

Microbee is considered to be the most successful Australian personal computer developed in the 1980’s. Over 70,000 Microbees were manufactured between 1983 and 1988. 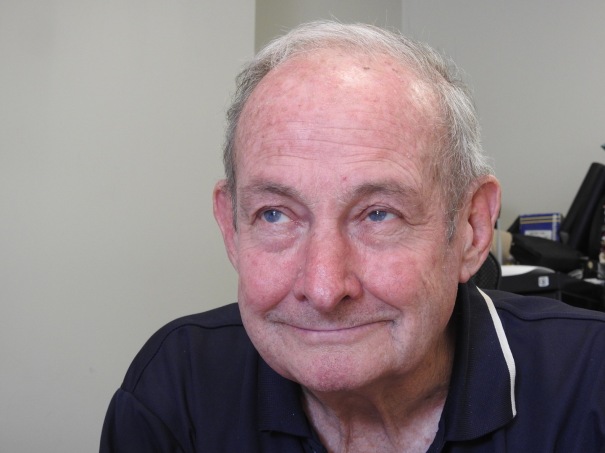 “I believe I have been sewing since I was small but the exact start date is lost in the mists of time.  My first stuffed toy, a rabbit named “Bung”, is very laughable but if you start at the beginning, you can only improve.  From there, it evolved into helping my mother with dance costumes, sewing on my own Girl Guide badges on and eventually making all my own street clothes.  On leaving high school, the option for fashion was open but I had never been interested in treading a well worn paths and quite frankly, fashion seamed to be so competitive and catty so as to actually repel me.  The only truly creative and appealing option was costume.

Two years at TAFE taught me basic construction, pattern drafting, wig making and styling, theater makeup and SFX, art finishing, costume history, fashion drawing, wardrobe management and, oh, a hundred other little things, most of which I think I remember. What they don’t tell you at the end is that there are not many vacancies in the industry and after mucking around for a bit, I did end up in a succession of knowledgeable and in the end, quite high profile fabric and haberdashery businesses culminating in buying my own.  The sewing learning curve got even steeper whilst learning everything anyone would teach me about the form and function of sewing machines, including techniques and servicing procedures, ending in being a qualified sewing machine repairer. I still don’t feel like I know enough and certainly not everything but I feel confident experimenting with new things and knowing that if something does go wrong, I’ll probably be able to fix it.

Cosplay wise, I was always envious but never really went for it until 2016.  Having proved I was enough of a Zelda nut to win a preview play of Breath of the Wild and having to fly to Sydney to do so, I wondered what else I could fill my time with and I remembered something my husband had told me when we bought the First4Figure 24″ Ganondorf Figure; “If we get this, you have to make the outfit”.  So with three weeks until we flew out, I started out making the first one;  And the rest is history…” 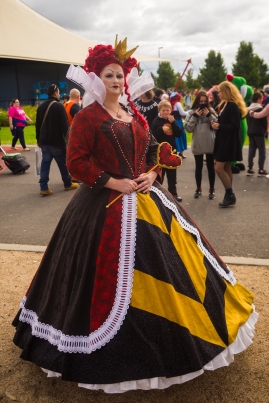 James Graewolfe’s interest in costuming began when he joined his first amateur theater company at the age of 14. His enthusiasm was piqued when he expanded his interests into medieval re-enactment and began prop-making and armoring for both theatrical and re-enactment events. It was during this time James started to appreciate the differences between ‘costume’ and ‘alternative clothing’. Since then he has expanded his work into science-fiction, fantasy, Gothic and most lately steampunk costuming and accessorising in an exercise that has now been going on for more than thirty years. Along the way he became a Drama teacher who has produced, advised and costumed several productions as well as being a consultant on several semi-professional video projects. His current goal is to work towards ‘practical costuming’, making costumes that are functional, livable outfits such as the wearer could have actually worn.

I was there at the birth of CCG’s (Collectable Card games) and CMG (Collectable miniature gaming) and have been playing many since, competing in various championships. I have numerous, untold final 4 positions, Australian titles in various systems as well as World championship titles in a few. I was appointed Australian TO (Tournament Organizer) for a number of companies and their gaming systems. My fondest memory of CCG was a game called Wyvern, for which I broke the system (I told them how and that the victory conditions should be changed) and so they did.

During this time, my love of role playing (RPG) inspired me to fill a void in the RPG vacuum and I wrote a Super Hero RPG “Super Squadron” which was released in 1983. Although it was very well received and I release two expansions for the game and a newsstand gaming magazine, my hobbies were not giving me enough of a return, so I expanded my comic mail order into a fully fledged store.

In 1990 I ran another Comicon called Supecom, although successful, I realized I was stretching myself thin adding conventions back into the mix, so I dropped out of this type of convention scene.

I have one of the most extensive comic collections in the world, covering both the US publications and Australian comics. My final year of Graphic Design History thesis was based on comic history/influence, which earned me a Higher Distinction for the year. (By this stage, even my professors were more appreciative of comic art). I am knowledgeable in the evolution and history of comic books as well as their collectability and grading. I think it’s time I shared this knowledge.

Joe from Alternate Worlds will be discussing Collecting and Collectables which also includes a ROADSHOW. (Like tv) This means after the presentation, people can present their own items for general valuation and History of Comic Books, the History of Comic Books has been updated and expanded since the last presentation. The subtext is “find Carol Danvers” aka Captain Marvel, which features points of history spanning.

In addition they will be doing Smash Up and Fluxx card game demos all day on request. 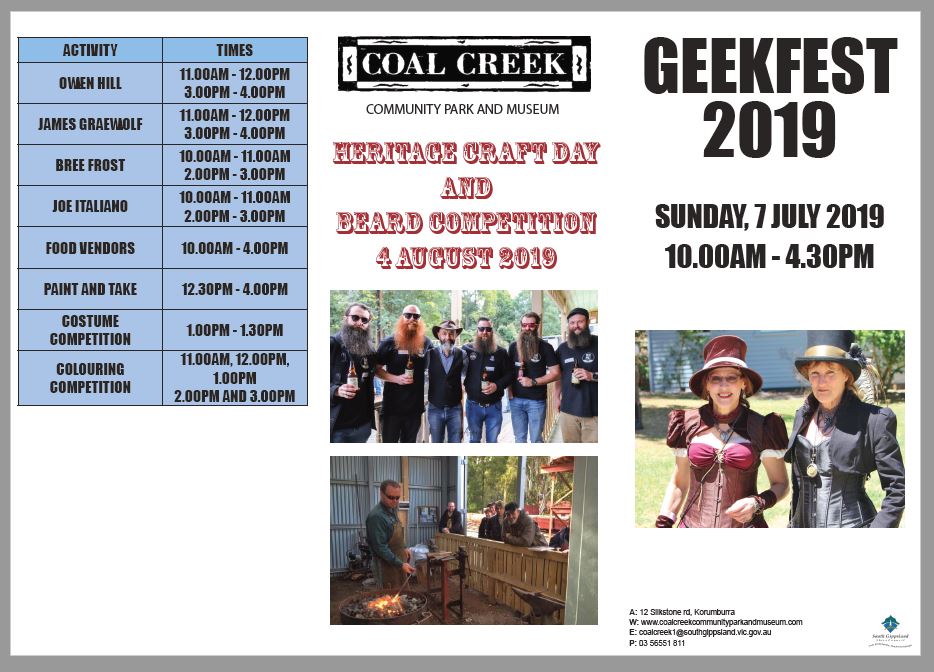 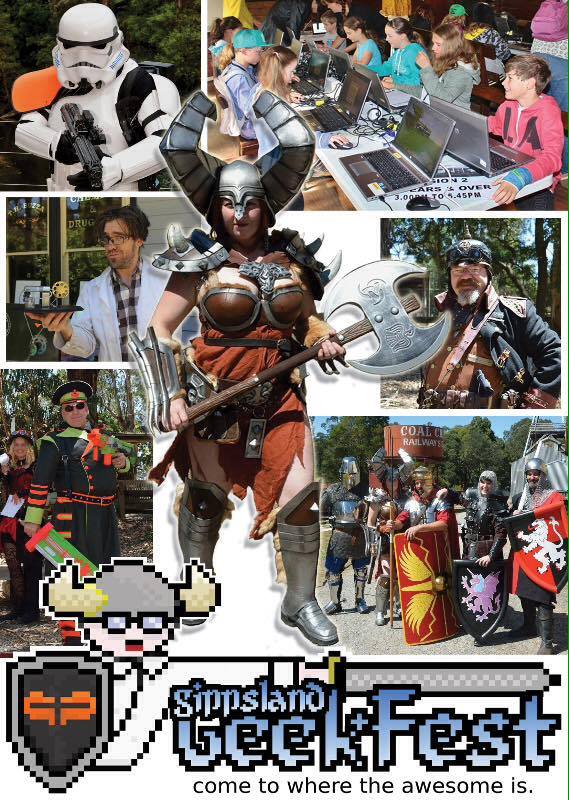